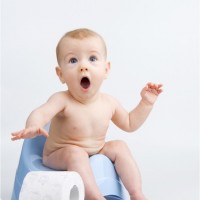 My first twinges, like period cramps, started around 3am one day about two weeks before my due date.

I had an appointment with my obstetrician that morning. I was glad to hear from him that things were progressing, I was fully thinned out, and to go home and wait for things to “crank up”.

By 3am the next day I was on the couch, taking a break from pacing around the backyard unable to sleep. The cramps were worse and about six minutes apart but didn’t seem to be fully fledged contractions. By dawn I was losing my patience.

On my next call to the hospital they said to come in for them to check me out. My husband and I headed in grateful for some activity. After testing the pad I had been wearing for amniotic fluid to see if my waters had broke, monitoring the baby, and warning me this could go on for days we decided to head home. Apparently I was in “spurious labour”, a fake one, which could even disappear altogether!

Luckily that was not to be. I stood up and fluid leaked out. The waters had broke afterall! My obstetrician came in and declared I was half way already, 5cm dilated.

It was quickly decided my baby was posterior – head down but facing the wrong way, with the back of her head against my spine. All I could remember reading about a posterior birth was the word “excruciating”.

Being posterior meant her position was stopping the labour from progressing. Since the waters had broke action was taken. My labour was “augmented” with a drip of some concoction to get the contractions cracking and hopefully flip her around.

Getting through the contractions with gas

Before long I fully understood what people had been trying to tell me – you can’t talk through a contraction. The waves of pain washed over me as my husband clung to the read-out of them from the monitors to help him understand what was going on.

Eventually I asked for some gas. I had decided to avoid the drugs if possible. The gas really saved me; it kept my breathing measured, gave me a nice little head spin and got me through until my obstetrician declared it was time to start pushing.

Baby was still posterior but doing well according to the monitors. My obstetrician hoped to flip her around manually on the way out. I later understood it takes a particularly experienced and skilled doctor to do this.

With his hands up there and me pushing like mad we succeeded. After about 33 hours of spurious labour, 5 hours of all out contractions, and an hour of pushing Maggie Joy was born.

It is kind of common

I later learnt my brother was born in the posterior position. Two other mothers I met through my mother’s group also experienced a posterior birth. The end results varied, one had a emergency cesarean and the other delivered with the help of forceps. My sister-in-law later had a posterior birth as well. So, it seems kind of common to end up with a posterior baby. Happily, all babies and mothers are doing great.