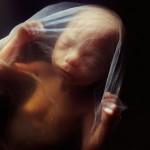 When Lennart Nilsson’s pictures of developing embryos were published in Life magazine in 1965, they caused a sensation. Within days, the entire print run of eight million had sold out. More than 40 years later, the photographs have lost none of their power

Advanced technology now allows even clearer and more magnified images. Some of these pictures were taken with conventional cameras with macro lenses, while others were taken with the use of an endoscope. Scanning electron microscope technology enabled Nilsson to take pictures at a magnification of hundreds of thousands

His remarkable pictures have been collected in a large hardcover book: A Child Is Born, published by Jonathan Cape

– Five weeks. The embryo is approximately 9mm long. A face develops, with openings for the mouth, the nostrils and eyes.

– Eight weeks. The rapidly-growing embryo is well protected in the foetal sac.

– Ten weeks. The eyelids are semi-shut. They will close completely in a few days.

– Sixteen weeks. The foetus uses its hands to explore its own body and its surroundings.

– Eighteen week. Approximately 14cm. The foetus can now perceive sounds from the outside world

– The foetus can now grab and pull the long umbilical cord. The skeleton consists mainly of flexible cartridge. A network of blood vessels is visible through the thin skin.